Thanks to folk musician Terry Kitchen for contributing this wonderful song to the State Dinosaur Initiative! 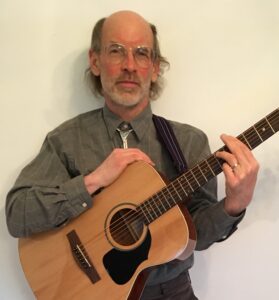 Or download the song as an MP3 here: PODOKEY SONG

Song copyright 2021, Terry Kitchen; you may use this song for educational purposes.

Terry Kitchen can be found everywhere online via Google.  More about Terry from Wikipedia.

Scientific notes about the song:

Note:  Songs are meant for enjoyment, so sometimes artists take a little artistic license during their creative process.  As Terry himself said, “It’s hard to be exact, when you’ve got to rhyme!”  Hey, if it gets people talking about Podokesaurus — we totally encourage that!  But, for the sake of scientific accuracy, we want to make sure we clarify a few things about the song.  This section is especially important for educators/mentors/parents who want to teach students about scientific accuracy in paleontology to avoid spreading misinformation.

Here are some minor pieces of misinformation we found in the lyrics:

Fun classroom exercise for teachers/afterschool program instructors: See if you can have students identify any misinformation that they can find in the song themselves, and make a list.  See how it matches up to the above!

PODOKEY (THE SWIFT-FOOTED LIZARD OF HOLYOKE)

South of Northampton in the shadow of Mt Tom
Two hundred million years or so ago
The dinos had a footrace for King of the Swamp
Reptiles came for miles for the show
The sauropods lumbered, the raptors all sprinted
But when the dust settled, guess who was the winner

In 19 and 10, as summer turned to fall
Madame Talbot was tapping with her hammer
She thought she saw the outline of an eagle’s claw
On the body of a six-foot salamander
She brushed off the bones and said I proclaim this
Podokesaurus holyokensis

If Podokey could talk, I bet he would say
Take care of the earth ’cause it’s got to last us a whole lotta days

Here’s the Podoke-Karaoke-ready version of the song (instrumental with melody), so you can record your own version of our state dino song:

And here’s the Podoke-Karoake version as an mp3: PODOKEY KARAOKE EDIT 3 20 21

And for those of you who don’t even need the melody, here’s the instrumental only version: