While we’re hoping Massachusetts will soon have its own official “state dinosaur”, right now Massachusetts’ current “state fossil,” is dinosaur tracks, since 1980.  Dino tracks were first found in the region in 1802, in the Connecticut River Valley.  Most of the dinosaurs that created these tracks were thought to be ~20 foot meat eaters, around 200 million years ago.

A team of researchers has recently studied the dinosaur tracks in the Amherst College Beneski Museum (which holds more dinosaur tracks than any other museum in the world) using advanced 3D software; its Museum Education Department is led by state dino task force member Alfred Venne.  Here is some of the research they’ve come up with (note that some concepts are bit complex, so this might be ideal for older students, or may be best shared with students when teachers/mentors are present to help explain some of the vocabulary):

And here’s a great video about other fossilized impressions, preserved in sedimentary rocks and the entire process of how they fossilize (very similar to dino tracks) by Alfred Venne:

If you want to see real dinosaur tracks, be sure to visit the Beneski Museum in Amherst, MA — it’s free, and it’s literally the best resource in the world regarding dino tracks.  Directions and visiting info can be found here, along with a virtual tour of the museum’s specimens.

For more information about dinosaur tracks, please visit the Jurassic Roadshow website, maintained by one of our task force members, Sarah Doyle, here at jurassicroadshow.com.  And another great dino track resource Sarah is involved in is the Dino Track Discovery Site, here at dinotrackdiscovery.org.  At this site, you can find bios of some of the most important people in the region’s story about dinosaur tracks, as well as find a great map showing all the sites in Massachusetts containing dino tracks (but don’t take any without permission please!) 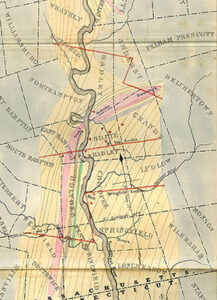 MA Dino track fossil locations can be found at dinotrackdiscovery.org. Click on the map above to visit.

Check out this article on dinosaur tracks, about one of the early contenders for our state dinosaur (Anchisaurus), written by state dino task force member Barnas Monteith:

Were Anchisaurs, Eubrontes and Other Massachusetts Dinosaurs Gregarious or Antisocial — Dinosaur Tracks Tell The Tale!