The Massachusetts State Dinosaur Initiative started in late 2020 as a simple idea by State Rep. Jack Patrick Lewis (representative for Ashland and Framingham, Massachusetts) — to get kids interested in the legislative process by filing a bill about dinosaurs!

After reaching out to constituents, colleagues and friends, it became clear that there was plenty of support out there for this idea.  The question was, what dinosaur should be the one?  How would it be chosen?

After the media became aware of the idea, the story ran across dozens of media outlets around the world (including CNN) it was decided that the choice of dinosaur should be an open democratic process.  The decision was made to hold an vote on exactly which dinosaur should be the Massachusetts State Dinosaur.  It was also decided that an advisory council / task force (linked above) would be formed that would include a panel of experts to advise the process of selecting the dinosuar, and helping to build a science and civics-drive public education campaign around the whole project.  A poll was held online, and people were asked to choose between Podokesaurus holyokensis and Anchisaurus polyzelus (see an article about dino tracks from some of these dinosaurs here). 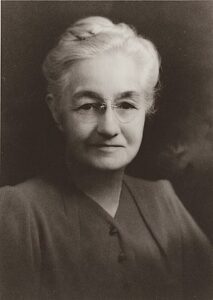 By January and February, 2021, the story was pretty much everywhere in the local news.  After tens of thousands of votes, it was finally decided that the state dinosaur of choice would be: the Podokesaurus.  The discovery of the Podokesaurus is also an unlikely one.  The dinosaur’s fossils were originally found right out in the open, in a rock exposure, by Mignon Talbot, a female paleontologist who came across the fossils while walking through the woods in Holyoke, MA, in the early 1900’s (and at that time, female paleontologists were more uncommon than dinosaur fossils!).

A grand announcement was made about the choice of Podokesaurus as the state dinosaur via a  Zoom press conference, hosted by the Boston Museum of Science, which hundreds of people across the state attended. 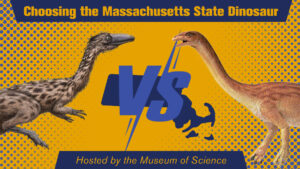 In the following weeks, dozens of legislators voiced their support for, and co-sponsorship of the bills, and it is hoped that this bill will pass with flying colors in the near future.  The MA State Dinosaur Advisory Council meets regularly to discuss matters relating to the bill, and plan out how we will develop educational resources, both about the legislative process and about the state dinosaur itself (and dinosaurs in general) that can be used by educators, parents, mentors and children around Massachusetts, and beyond!

And, the initiative is far from over!  There are now plans to file a bill to protect state fossils like the Podokesaurus from being harmed or excavated, without .  There are also discussions right now to try and purchase land within Massachusetts to create a dinosaur education resource center to educate future generations about these amazing creatures that we all loved as children (and many of us still love, as adults) — the dinosaurs.

Please explore our site, and reach out to us with questions and comments about how we can make this a more fun place for everyone!

Stay tuned for even more news and initiatives where we will need your help, in the very near future!

This website is under construction — more to  come soon!  For more info, please fill out our contact form and we’ll keep you posted when the full site is up!  Thank you for visiting!